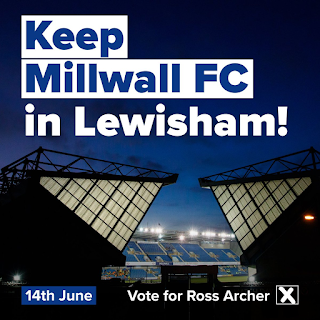 
Labour-run Lewisham Council had planned to use the Den as part of the New Bermondsey development, but critics warned that forcing Millwall F.C off the land would meant the club would have needed to leave the borough.

The council’s choice of developer, Renewal, had also been called into question after links between the company and the Lewisham Labour party were revealed. The CPO process was paused in 2017 to allow an investigation into some of the claims. During last year’s mayoral election Conservative candidate, Ross Archer, pressed Labour on several occasions to commit to axing the CPO which they would not do. Prior to the election Lewisham Conservatives supported the campaign to save Millwall F.C by writing to the Mayor of London and the then Secretary of State for Local Government, Sajid Javid MP, to ask for the decision to be called in for review back in 2017.

Chairman of Lewisham West Conservatives, Thomas Turrell, welcomed the decision saying "Millwall F.C have been in Lewisham for over 100 years and I’m pleased that Lewisham Council have finally done the right thing, dropped the botched CPO and help secure the club’s future in the borough. Millwall F.C do a lot of work in the local community, especially for grassroot football in Lewisham, so it is welcome news that they will be able to continue to have a home in Lewisham".
Email ThisBlogThis!Share to TwitterShare to FacebookShare to Pinterest
Newer Post Older Post Home
Thomas is Chairman of Lewisham West & Penge Conservative Association and was the Conservative parliamentary candidate for Greenwich & Woolwich at the 2019 General Election.