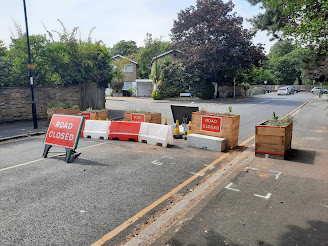 Labour-run Croydon Councils controversial decision to restrict access onto Sylvan Hill, Stambourne Way and Fox Hill were introduced without consulting Bromley Council – despite Fox Hill being the boundary between the two boroughs.

Some residents were left furious after the road changes, which risk increasing congestion and pollution with more vehicles being directed onto Anerley Road, Belvedere Road and the surrounding area, were introduced without any notice being given. One Labour Councillor in Croydon has also claimed the changes will ‘decimate’ the triangle. Croydon’s Federation of Small Businesses have also criticised the changes.

Bromley Council was given no notice of the changes, despite these roads being on the border of the two boroughs, with the changes being introduced within 72 hours of the announcement. This means residents had no notice of the huge changes to the roads. Concerns have also been raised that the full impact of the changes may not be felt until Schools reopen, with two schools in the area there are fears of traffic chaos.

Bromley Council has since begun pressuring Croydon Council to reverse the decision raising concerns about the huge impact on roads managed by Bromley. Campaigners have raised concern that Croydon Council appear to be trying to shift the congestion issues from one authority to another without addressing the real issue.

“I can readily understand why residents are irritated by this debacle. Bromley council was neither consulted nor even notified about this scheme.

“As early as the 27th July at my request Bromley officers liaised with Croydon, requesting them to desist with any further implementation of their scheme with immediate effect, but that decision clearly and unfortunately sits in their gift rather than our own.”