Conservatives Demand Assurances on the Future of Blackfriars Service 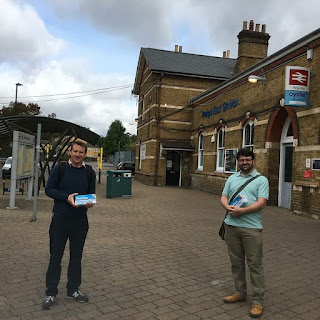 Conservative campaigners in Beckenham and Penge have written to the Managing Director of Southeastern to express concern about the future of the rush hour Beckenham Junction service to Blackfriars, which was suspended by the rail operator at the start of the COVID-19 pandemic.

Chairman of Lewisham West & Penge Conservatives, Thomas Turrell, has written to David Statham, Southeastern’s Managing Director about the future of the service after the operator said it could not guarantee that the Beckenham Junction to Blackfriars service would be reinstated in future.

Prior to the changes as a response to COVID-1, Southeastern ran a rush-hour only service between Beckenham Junction and Blackfriars, serving Kent House and Penge East. This was only direct route into the City of London from these stations, the only alternative route being to change at Herne Hill, where the alternative Blackfriars routes were often be full, which is why protecting the line is so important for local commuters.

In the letter Thomas asks Southeastern to provide clarification on three points:

1. When will commuters and businesses expect an announcement on the future of the service?

2. What alternative routes are being considered if this route is indeed removed?

3. Will Southeastern consider extending the service beyond rush hour to accommodate changes in demand?

4. Will Southeastern consider a phased return of the service to access the demand for the service?

“With people starting to return to work in the City, and others starting to plan their return, we need train operators to start shedding light on what services will being returning. This route provides the only direct route for Beckenham, Kent House and Penge East commuters into the City. It’s just not feasible to see how this route can be removed and not replaced!”

“We don’t yet know the commuter patterns that will emerge once we begin returning to normal, or the demand on the routes. That is why Sarah and I are seeking answers not just on the future of the route but also what happens if it axed. People need to have an understanding of how their journeys to work may look as we emerge from these restrictions.”