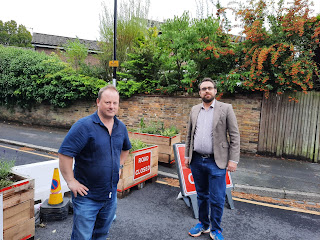 Local campaigner and Vice-Chairman of Lewisham West & Penge Conservatives, Tom Capon, has written to the incoming Leader of Croydon Council appealing to her to scrap the controversial road closures along the boundary in Crystal Palace and South Norwood.
With the current Labour Leader of Croydon standing down with Councillor Hamida Ali being elected as the new Labour Group Leader, Tom Capon has written to Councillor Ali urging her to break with the previous leadership and remove the barriers highlighting the traffic chaos they are causing and misery they are inflicting on Bromley residents.
In his letter Tom has highlighted that the restrictions, which were introduced in July with no prior consultation, would not improve air quality in the area owing to the increased congestion. Tom points out that shifting the congestion from one borough to another does not address the issue citing that “air pollution doesn’t respect borough boundaries” before calling on the incoming Council Leader to follow other councils in axing the scheme.

Conservative-run Bromley Council has been pressuring Croydon Council to remove the barriers since late July, including escalating the issue to Transport for London and the Mayor of London.

Tom Capon, who is also the Conservative spokesman for Crystal Palace ward, said:

“Croydon’s Road Restrictions are causing traffic chaos across Crystal Palace and Anerley. This so-called Low Traffic Neighbourhood is anything but, with residents on Milestone Road getting the brunt of it. More traffic means more congestion and more pollution, so I am calling on the incoming Leader of Croydon Council to do the right thing, break with the previous administration and scrap this disastrous scheme.”
“These barriers have been in place since the end of July and the congestion is not getting any better. We need to be working to clean up air quality in the area and it is painfully obvious this scheme is not the answer. Bromley Council is right to be continuing to push the Mayor of London to remove these barriers”.